Tonight it’s our Bombshell Radio​ Top 10 Countdown for November. This time I had the assistance of 4 Presenters who also air their show on Bombshell Radio. Alex Green ( The Heart Goes Boom, Stereo Embers) ) Jazzamatazz (Retro Dj mixes of many groovy styles of music (Jazzamatazz) Matt Dalzell (The British are Coming) Tuesdays on Bombshell Radio and Special Guest judge returning this month Bernard Frazer of Church of Trees & Taxi Below In the comments section I will include insights and reviews of our Top 10 from Bernard. . These artists stood out to us and deserve to be recognized. As usual, on the show, we’ll check the artist’s Facebook profiles and try to enlighten ourselves and our listeners with any background of our chosen 10. We’re looking for likes, interests, and influences. Then as a way of saying thank-you to the artist we will let their favourites dictate our playlist tonight by playing one or two of their choices. If the artist doesn’t have one tonight, as a tribute to President Elect Joe Biden we have Joe tracks on hand as substitutes. Plus a few other surprises This is Addictions and Other Vices 747 – Bombshell Radio Top 10 Countdown.

We hope you enjoy!

Our Final Top 10 results are in…

Bernard Frazer is the founding member of Canadian synthpop project, Church of Trees, whose 4th album, Progression was released this Fall. Frazer is also the producer and host of a new podcast called The Essence of Cool, an exploration of innovative music through the eyes of musicians, producers, and prominent music enthusiasts. The podcast will be unveiled in early 2021.

Absolute euphoria took hold when I dove into Can’t Talk, Won’t. A blistering and unrelenting track from beginning to end, the band draws guitars like machine guns, and spews vocals like flamethrowers. It opens with: “Did you not feel old today? / unachieved and far away from my own goals / in my life“, It’s a lyric that clutched my neck witha vice-like grip. Massively catchy, and an absolute piledriver… but when the chorus hits… well, as the Sopranos would say, “fuggeddaboudit”! Lead singer and bassist Jess Eastwood says: “Can’t Talk, Won’t is when you have a lifelong habit of repressing and never really deal with the things that have hurt you. Eventually you get to the point where tiny, everyday, meaningless things start to trigger all of that unresolved (crap) from your past. ” Well, hot damn, guys, I absolutely love when you let it all out!! In my books, this song is number one with a bullet!!

2.Future Islands – For Sure

My introduction to the song For Sure was on The Late Show with Stephen Colbert. No audience, no applause, yet the band Future Islands clasped me so tightly in their grip that I couldn’t break away. It wasn’t just the atmospheric synths, the unrelenting beat, or the slick production, it was all those things, but it was equally, singer Samuel T. Herring. He sang the song like his life depended on it. Emotive and gripping, he completely captivated me. Afterward, he said “I was dancing like I knew everyone was watching.” But his dancing and emoting wouldn’t have taken this band anywhere without the song… and it’s a great one! This is a band that didn’t jump into music to be famous, they just wanted to write great songs… and perform the crap out of them. And, with “For Sure”, they have done both. Superb!

Named after the movie, Abbie Ozard’s new single True Romance has more to do with the Quentin Tarantino film than just the title. The Go-Go’s-style throwback was inspired by the main character, Alabama. As Ozard says: “I watched True Romance and thought… i just want to be Alabama … with a cool leopard print coat … and a cool life, and ride around in a pink cadillac. Hopefully one day I’ll be happy with everything that’s going on and the way I am, but for now I’m just gonna carry on wishing I was in True Romance” Regardless of the back story, this is a peach of a track with a banging vibe and non-stop energy. There is such a strong 80’s feel to it that I’m desperate to pull out all my Bangles and B-52’s albums! I really loved this one!

With a gorgeous tone, a slightly Lorde-esque delivery, and a seductive yet minimal production, Australia’s May-A may fast become the newest Indie-pop sensation with her single Apricots. A very personal song about navigating a queer relationship, the lyric easily transcends to a more universal struggle of coming to terms with one’s sexuality. Maya told American Songwriter Magazine: “The message behind ‘Apricots’ is honestly that you never know what’s coming for you in life. Halfway through writing the song I’d realized it was the first time I’d written about a girl. I kind of took a moment to look back on my previous relationship and the person that I used to be—or the person that I thought I was —and had a bit of a laugh.” A deftly crafted song, a velvety vocal, and lush production will likely translate into a massive hit. At least, I hope it does. Brilliant work!

North London’s Declan McKenna may very well be reviving 70s glam rock with his second LP “Zeroes”. Somewhat reminiscent of Marc Bolan, the 21 year-old delivers a delightfully glitzy romp with his single “You Better Believe”. The massive glam sound is eerily reminiscent of long-time T-Rex/Bowie producer Tony Visconti. But it is actually the handiwork of Jay Joyce, better known for producing Keith Urban, Carrie Underwood, and Little Big Town! Regardless, this is one massive soundscape, that seamlessly fits the Bolan-esque moniker. It had me racing to the closet to dust off my sparkled platform boots and my DVD copy of Velvet Goldmine. Kudos to McKenna for resurrecting 1973! Long live glam!

6.Passenger – A Song for the Drunk and Broken-hearted

Brighton/UK-based Mike Rosenberg, aka Passenger, wrote and recorded his latest album before COVID caught the world in its paralyzing grip. “A Song for the Drunk and Broken-hearted” is both the title of the album and its lead single, which is an effortless and poetic flow of guitar-driven heartbreak. The upbeat Americana-tinged ditty lures you in with its slick and inviting production. But the closer you listen, the more its boozy lyrical drama is revealed. As Rosenberg explains: “Coming out of a break-up creates such a fragile window, you’re so used to the safety of being with somebody and suddenly you’re out in the world on your own. And you get pissed and probably make some bad decisions. “In some ways, you make it worse for yourself. But it’s a heady moment, losing love and being drunk. And it’s universal. Everyone goes through it at some stage.” A lovely, well-crafted tune!

7.Sunflower Bean – Moment in the Sun

Premiering as Annie Mac’s Hottest Record In The World on BBC Radio 1, Moment in the Sun is a bit of a departure for New York trio Sunflower Bean. Known for their earlier 70s-tinged offerings, Moment in the Sun is much more a synth-laced indie-pop belter that is destined for greatness. Euphoric and catchy, the song fuses funky guitar and bass lines with spacey synths and tasty vocal hooks. The lyric couldn’t be more appropriate for a year that has been locked in the clenches of a deadly virus and a horribly divisive race for the presidency. Singer Julia Cumming notes: “‘Moment In The Sun’ is about finally recognizing what is important in one’s life, the people you decide to spend it with. All of these things we distract ourselves with… All of that is meaningless in comparison to one great day, hour, or moment with someone you really love.” I emphatically agree! I’m putting this one on infinite repeat!

Alt rock is alive and well and living in Florida! Led by writer and multi-instrumentalist Travis James, this outfit pumps out sizzling guitar and vocal hooks that are simply catchy-as-hell! Perhaps a little EMO, there’s a hint of The Fray, and just the tiniest touch of Fall Out Boy in their banger Goodbye. James’ vocals are the real treat on this one: moody and sultry one second, then soaring and anthemic the next. I suspect that Goodbye will be one of alt-rock’s most added singles on Spotify playlists and rock radio. Great track, boys!

Hailing from Oxford, UK, Low Island have released their first single in over a year. The lush and groove-laden “Don’t Let the Light In” is mature and complex electro-pop. It wraps you in a warm, fuzzy glow. With its emotive synths and hypnotic beats, I found myself a slave to the rhythm, unexpectedly across the linoleum tile on my kitchen floor. Singer Carlos Posada says “It’s a song about trying to preserve the moment of falling in love, but ultimately being unable to.” Also according to Posada, the song was finished in remote France the very day that a national lockdown was announced. Within hours, the band began travelling back through the deserted countryside to begin their own lockdown in the UK. I, for one, am glad they finished the song in time. It is superb!

Philadelphia-based folk-rockers, Mt. Joy, have followed a narrative that was prevalent among many American artists this year … Dump Trump … with their new single “New President”! As frontman Matt Quinn says: “I hope the song captures the feeling of realizing we are at the final breaking point, but feeling hopeful that we can still fix it if we do it together. And don’t get me wrong, Fuck Donald Trump.” Despite the common theme, their single New President is a beautifully manicured number. It is drenched in dreamy background vocals, vibraphone, and acoustic guitars. If you weren’t paying close attention to the lyric, you might think it a plaintive love song… something more reminiscent of the Hall and Oates album “Abandoned Luncheonette”. This is a superbly delicious production, and worthy of repeat play. Well done boys! 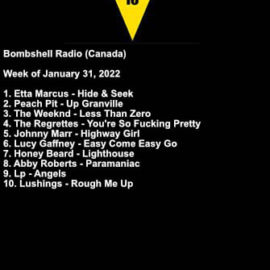 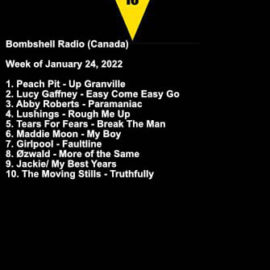 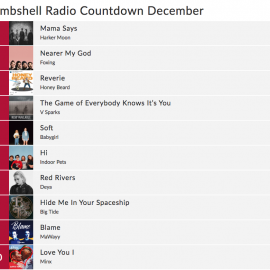 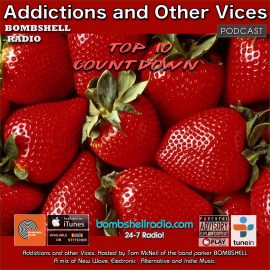 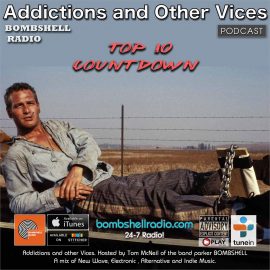 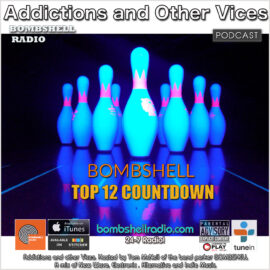 Addictions and Other Vices 472 – Top 12 Countdown 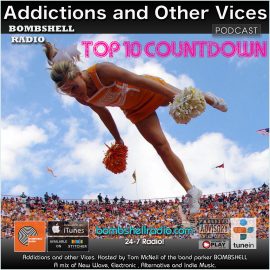